You are here: Home / Cooking / Braise / Sunday Gravy with Meatballs and Ribs 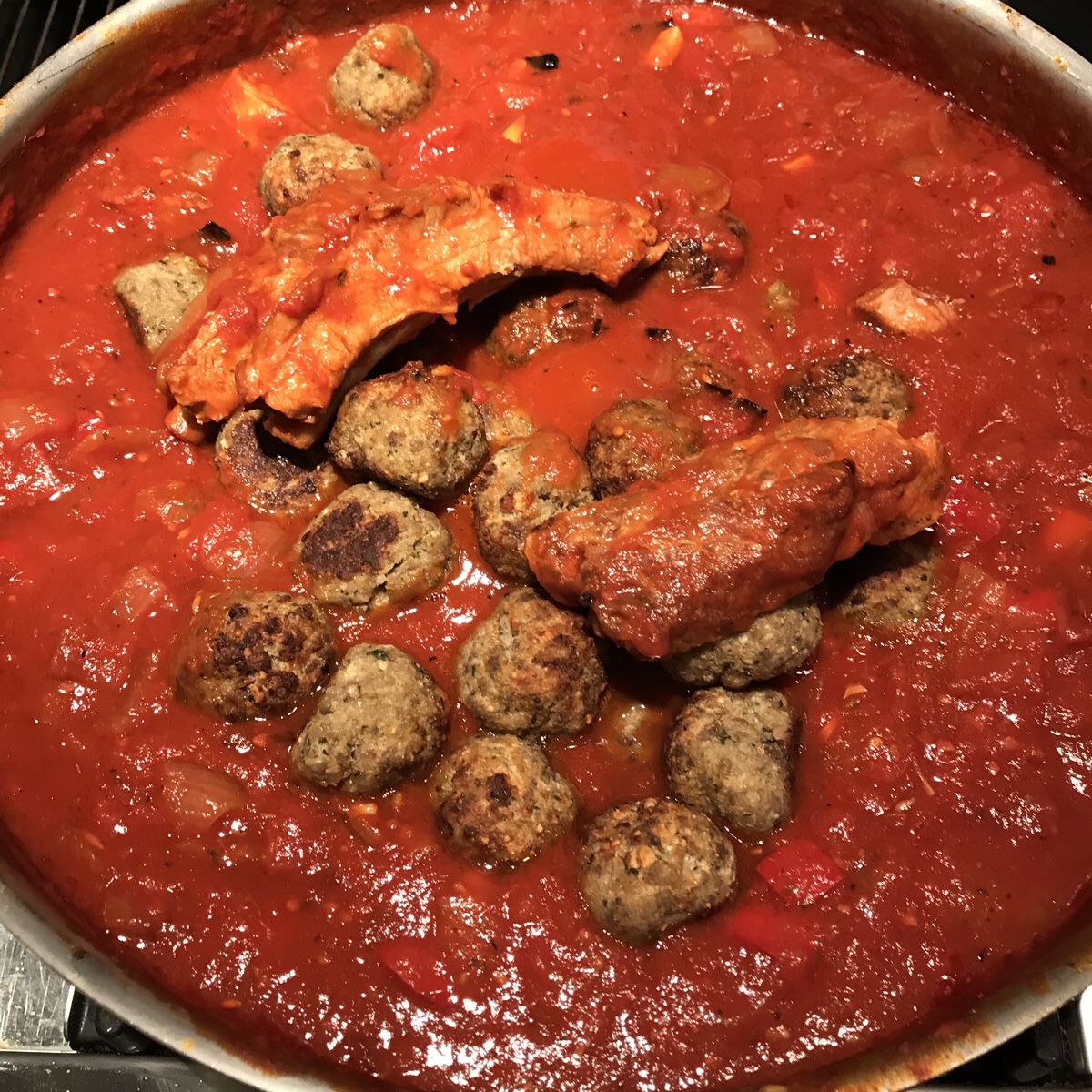 Sunday gravy is an traditional Italian American dish where various meats are simmered in the tomato sauce making it “gravy”. Without the simmering meats it might be a marinara sauce or something else. Anyway after simmering, the meats are removed from the sauce and served separately. Pasta is tossed with the gravy. Some of the possibilities for the meats are spare ribs, short ribs, baby back ribs, sausage, bracciole, veal shoulder chops, meatballs. Since its just the 4 of us for dinner, I’m sticking to my number 1 and number 2 favorites: meatballs and ribs, in this case, baby back ribs and some frozen meatballs I made a few weeks ago. I’m making extra gravy which I will be freezing and using for something else in the future (thinking baked ziti… ). 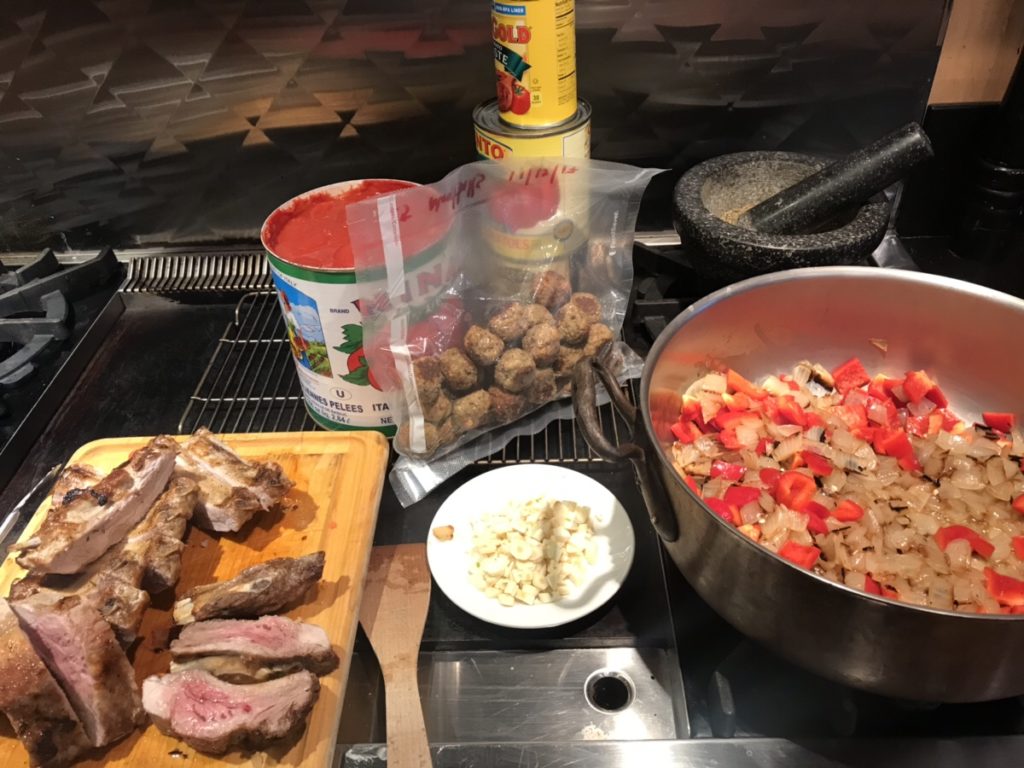 First you need to brown off the meats. You can fry them in an half inch of olive oil in the large pan, broil or roast them in the oven, or even sear them off on your charcoal grill. That last one is my favorite method. I even sear the onions when I fire up the grill to brown the ribs and sausage. In this case, in the middle of December, I chose the broiler. Since I was only doing one rack, I browned the slices onions under the broiler at the same time. 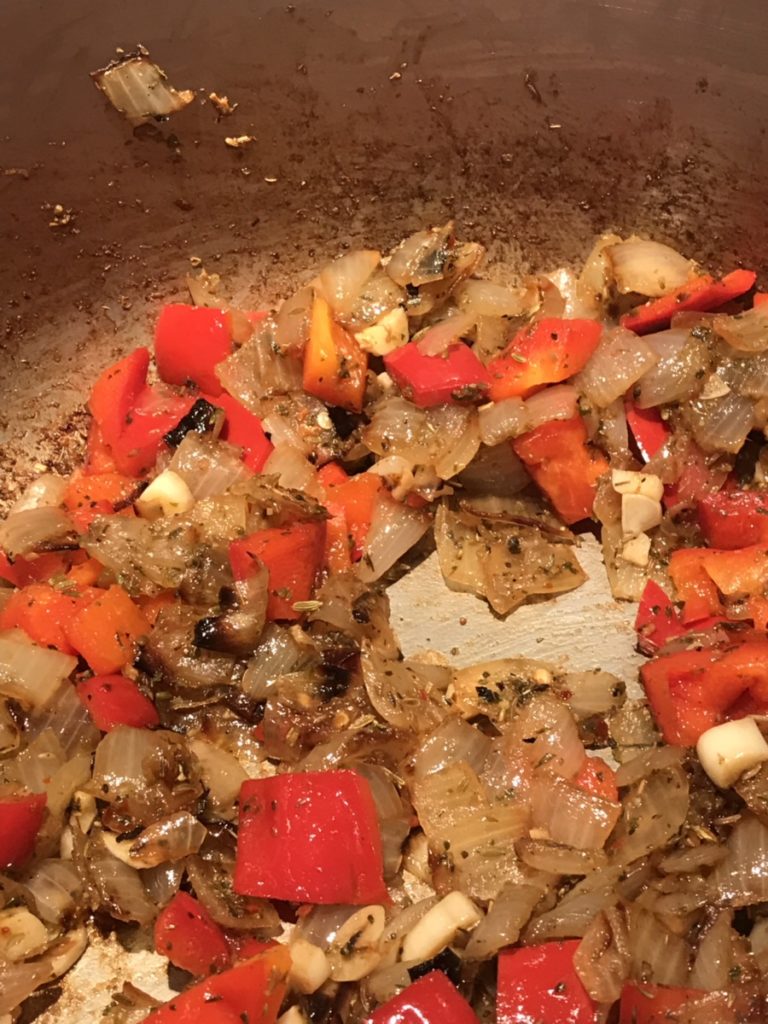 After everything was cool enough to handle, I cut the baby back ribs  into individual ribs. Then I diced the the onions and threw them into the pot and set the heat to medium to start a sauté. I added some red peppers and a whole head of garlic, coarsely chopped. I then sautéed the veggies in the pork fat from the ribs. I cooked them until they were starting to stick to the pan and beginning to brown. I added the spices and bloomed them with the hot veggies. Then I added the tomato pasta in several separate spoonfuls and continued the sauté until I saw some tomato paste browning. Finally I added the big can of tomatoes to end the sauté and used a wooden spatula to scrape the brown bits from the pan and chop up the whole tomatoes.

Here’s a really important tip: You want to just barely cook the meats in the gravy. I know from experience that ribs take 2 to 3 hours to cook in this setup. The meatballs were fully cooked previously in the oven, but were frozen. So they’ll take almost an hour to heat through in the gravy bath. So I gave the ribs a 2 hour head start. I’ll be checking them while the meatballs are in there and if they finish first, I’ll pull them out and keep them warm until dinner. The same goes for the meatballs. Once they are hot and their flavors have married with the sauce, I pull them out and keep them warm until dinner time.

I’m actually making this a day ahead, so after all the meats are all cooked they are going back into the pot to cool in that flavorful gravy overnight. If you’ve done a lot of braising, you know that it is always best to cool the meat in the braising liquids. This gives the meats more chance to exchange flavor with the liquid. Which is the reason that stews and chilis usually taste better the next day. 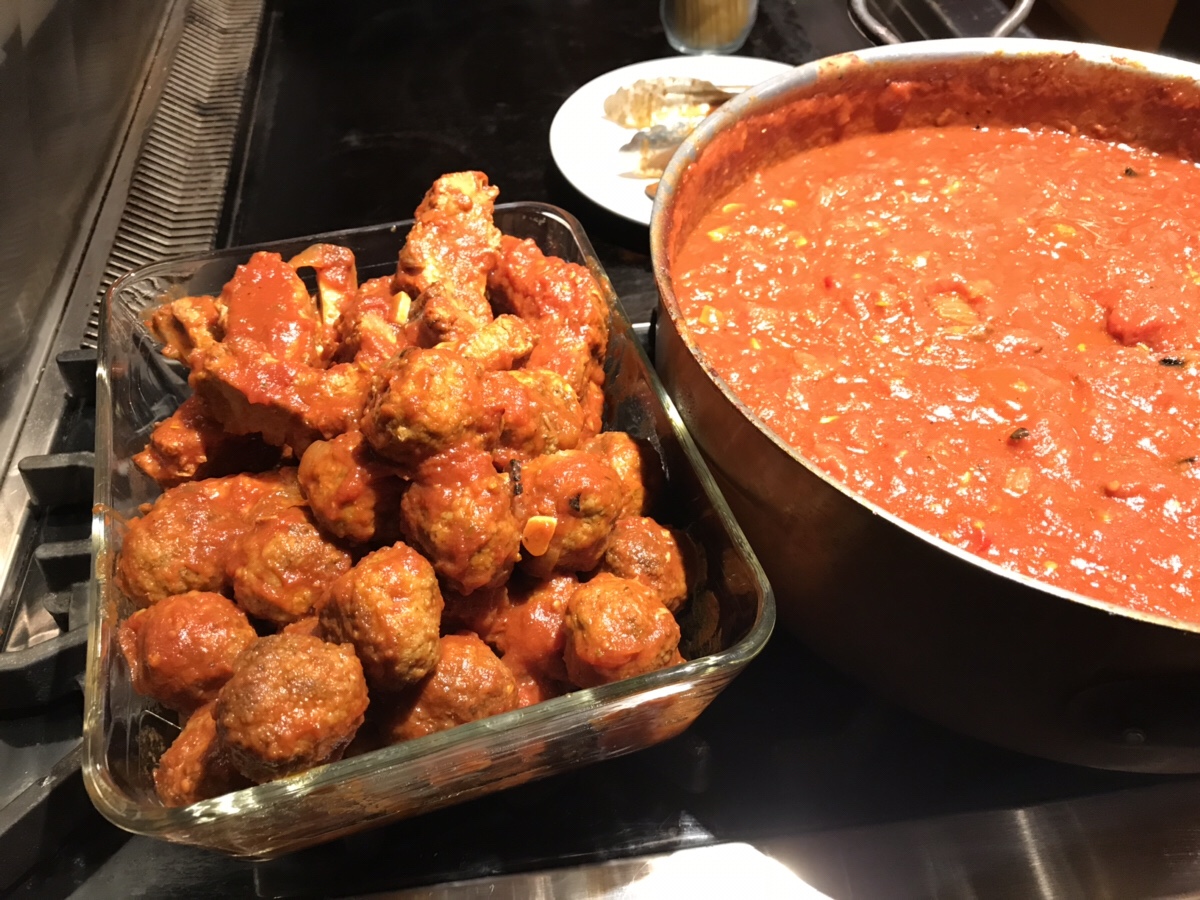 Recipe for this batch:

Dice onions and put in large pot with some of the juices and rendered fat from the ribs. (mine is 8 1/2 quarts) Sauté  the Onions. once they start cooking, add the peppers and the garlic. Add the spices and continue the sauté until the mixture starts to stick to the pan and brown. Add the tomato paste and sauté a few more minutes until you see the tomato paste starting to brown. Add the canned tomatoes and scrape the browned bits off the pan. If you are using whole tomatoes, chop them into bite size pieces with the wooden spatula.

Cut the rack of ribs into individual pieces and add to the pot. after about 2 hours, add the meatballs. When the meats are cooked through and the ribs tenders, remove from the pot and keep warm until dinner. Cook up pasta, drain, and toss with some of the gravy. Serve with an extra bowl of gravy and the meats.